Inspirational Women in Tae Kwon Do

There is often a misconception that Tae Kwon Do and other martial arts are male dominated sports – but that could not be further from the truth. At our school, 50% of our students are strong, confident women, aged 4 through adulthood. As an activity that helps to foster a high-level of discipline, dedication, and hard-work, Tae Kwon Do is a great for people of all genders and ages to spend their time. While Tae Kwon Do can be of great benefit in educating people in the arts of self-defense, it also helps to provide a robust philosophy on how to live your life – and that is something we can all benefit from. If you want to ensure that your daughter is equipped with vital life skills, all whilst having fun and staying physically active, then Tae Kwon Do might be the sport for you. With that in mind, today we’re looking at some of the most inspirational women in Tae Kwon Do.

First on our list of inspirational women in Tae Kwon Do is Adena Friedman. Acting as a fine example of how Tae Kwon Do training can lead to success in all areas of your life, Adena is a Wall Street leader, and moreover, she was the first female executive of the NASDAQ US Stock Exchange index. After enrolling her children in Tae Kwon Do training at a young age, Adena decided to get involved herself and make it a family activity – a great idea! A huge part of our training program is centered around family togetherness and training together as a family. She credits her Tae Kwon Do Black Belt with instilling the vital business and personal principles of “self-reliance” and “leadership skills”.

Our next inspirational woman is Julia Cross; she’s a 6th Dan Black Belt from Scotland, UK, and has the honour of being World Taekwondo Champion six times. Moreover, Julia also won the European Championships a staggering fifteen times, which unsurprisingly places her as one of the most successful athletes in Tae Kwon Do Federation history. After 30 years of competition, she unfortunately had to retire after two gruelling hip replacements; but rather than disappear from the public eye, she has channelled the skills she learnt through Tae Kwon Do to help others, traveling the world the raise awareness about mental health. To learn more about the mental benefits of Tae Kwon Do,click here.

Next on the list is Kubra Dagli, not only an inspiration for her Tae Kwon Do ability, but also for the strength of character she demonstrated in standing up for her beliefs. After claiming gold at the 2016 Tae Kwon Do Championship in Peru, she should have been on top of the world; however, she received backlash and criticism for her decision to compete in a hijab, the traditional religious garment from her native Turkey. Despite wanting to only compete in Tae Kwon Do, Kubra instead became an important figure in the fight for tolerance and equality in women’s sport, and consequently shot to fame as an inspirational figure to young women for this reason.

You may know our next inspirational woman more for her role as Lagertha in the popular TV series Vikings than her martial arts abilities, but Katheryn Winnick is a fantastic example of the dedication and discipline that Tae Kwon Do can provide. Starting her Tae Kwon Do journey at the age of 7, she gained her first Black Belt at the tender age of 13. She currently possesses a 3rd Dan Black Belt in Tae Kwon Do, alongside a 2nd Degree Black Belt in Karate. Aside from her acting career, Katheryn also works with her brother Adam to further the awareness of the importance of women’s self-defense.

Last but by no means least on our list is Carmela Hartnett, Australia’s most decorated international medal winner in martial arts. Carmella – or to address her properly, Grand Master Carmella - was the first Australian woman to be awarded an 8th Dan Black Belt in Tae Kwon Do, and she went on to win more than 70 medals on the international stage; an incredible achievement. Carmella also has 15 National Championships under her belt, alongside 20 State Championships, and she has been crowned Tae Kwon Do champion of the Commonwealth Games three times. After her unprecedented career, Carmella was named in Australia’s Tae Kwon Do team of the century, an honor that marked her as one of the 16 best Tae Kwon Do athletes to hail from the country. Moreover, in 2005 she was inducted into the National Athlete Hall of Fame. Despite her unparalleled successes, Carmela refuses to sit on her laurels; she now referees and coaches at an elite level, and spends what little time she has spare to educate a new generation of women’s Tae Kwon Do athletes.

She, and all the other women on this list, are true inspirations to not only women, but the sport in general. Tae Kwon Do is so much more than a combat sport, and these powerful women have shown the fruits of their labor by harnessing the character development and mental skills learned in martial arts. To learn more about all that Tae Kwon Do encompasses, you can read our blog series: 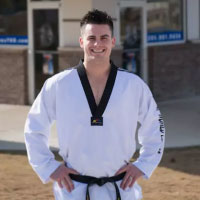 If you are motivated by what you have read here and want to try one of our Tae Kwon Do classes, getting started is easy! Master Justin Scarsella has been teaching with his team of talented instructors in Birmingham since 2004, and World Class Tae Kwon Do Schools have been operating across the country since 1983! Their top-rated instruction methods, along with the time and care dedicated to each student’s needs and abilities, have seen him receive glowing reviews throughout his career. He now has two locations in the Hoover and Birmingham areas, and his classes cater to all ages, aged 4 and up – even families can take part together! You can try your first three classes FREE - which includes a FREE uniform!